Tantra and the Turiyatita State By Sivananda

Another strand of what we now call Hinduism was Tantra, which according to Vivekananda, flourished because of Buddhist suppression of rituals which trace their roots back to the earliest ritualistic parts of the Vedas. 3 This was a religion which sought to find reality not in intellectual discussion and analysis, as the scholastic Vedanta of the Middle Ages increasingly did, but in the performance of rituals hoary with age and the exploration of the inner states of consciousness that increasingly were being verbalized and rationalized by the predominantly brahminical Vedanta. Tantric proponents were for the most part non-brahmins, agriculturalists, artisans, women and other “lower” strata of Hindu society; but the amazing powers they were accessing soon drew the attention of the brahmin Vedantists, including the doyen of Vedanta, Shankaracharya, who resolutely stood against them and, if we can believe the legends, may have succumbed to their incantations at the early age of thirty. Shankaracharya died at 32 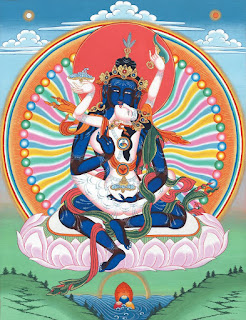