_______________
"In the beginning, verily, Atman alone was this universe , nothing else was active whatever"....(Aitereya Upanishad).
"Existence alone, Oh, Sweet Boy, was there before the creation ".....(Chandogya Upanishad).
"The Supreme unrolls this universe just out of His own free-will- the universe, which before creation remained unmanifest like the future tree in a seed, and has later on projected Himself out to be the world of endless variety, due to the delusory play of time and space, both the products of maya-- "...(Adi Shankaracharya).
_______
Here maya is nothing other than the total-mind intellect- equipment and the total intellect conceives the total-space and projects "time". In the play of "time" and "space', the intellect perceives the external dance of objects and the endless play of beings and this experience is called the created world.
Here an intelligent man may analyze the example given and may, most probably, arrive at a crucial doubt.
a) A seed germinates under certain favorable conditions such as moisture, sand, sunlight etc.
Similarly, for the unmanifest world to manifest itself from the infinite Reality, what are the auxiliary causes that should be present in order to hasten and finally accomplish this great projection of the world?
Again there can be another doubt.
b) " God creates the world outside," - if this is accepted as a de facto statement, it is true the verse does not explain what exactly is the material cause with which the Creator is creating the world of forms and names.
Both these questions are answered in the stanza wherein, it is declared that the creation is rendered possible by Delusion and the delusion -created "time" and "space" concepts. 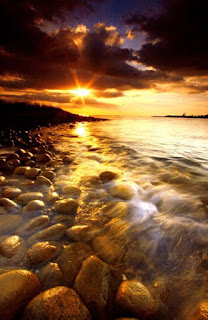