Kali’s aura and theme resonates with the concepts of rebirth, cycles, joy, courage, hope, cleansing and change. She is symbolically represented by flowers, dance, iron, swords, peacock feathers and honey.

Kali, a Hindu Goddess whose name means ‘time’, She is the embodiment of natural forces that either build or destroy. She is destructive of ignorance, dispelling negativity, however, She reminds us that good really can come of bad situations. Where there is sorrow, She dances to bring joy. Where there is fear, She dances propagating courage.
Goddess Kali is equated with the eternal night, is the transcendent power of time, and is the consort of the god Shiva. It is said that its Shiva who destroys the world, and Kali is the power or energy with which Shiva acts. Therefore, Kali is Shiva’s Shakti, without which Shiva could not act.
Of all the forms of Devi, She is the most compassionate because She provides moksha or liberation to Her children.
~ K. Nagori 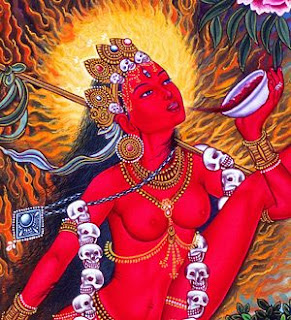