The Divine Self by Robert E. Wilkinson

'Spiritual Knowledge and Vision is dependent upon the realization of certain eternal truths, something which arises from the fount of the soul. It cannot be passed from one who has had it to another who has not.

The sense of it however can be communicated in a structure or form which may inspire a recognition in others. To enter into the thoughts of the Spiritual Sages, one has to allow their words to sink into our souls to mold our thoughts and create their own reverberations in a sympathetic resonance.

Their knowledge was accessible by listening to the old voices and allowing the "Sruti" (resonance) in the Soul to respond, to vibrate to the Vedantic hymn of knowledge and to allow that response to gradually gain in clarity, intensity and fullness.'

The Ground of all being is a spiritual Absolute ineffable in terms of discursive thought but susceptible of being directly experienced and realized by the human being. It is the Divine Self, same in each, One in All.

"    The Self is Being, not a being. By self is meant the conscious essential existence, one in all. Self is the fundamental aspect of the Brahman with a certain stress on impersonality. It is omnipresent, same in everything, intimate, pure and intangible.

The Self can be experienced as the self of the individual. It is at the same time universal. Self is that aspect of the Brahman in which it is intimately felt as at once individual, cosmic and transcendent."

"To realize Self is to realize the eternal freedom of the spirit. The first realization of the Self as something intensely silent and purely static is not the whole truth of it. There can also be a realization of the Self in its power. Establishing the mind in the Self means the conviction that the self alone is all, and that there is nothing other than it.

As ones process deepens, the pervasive sense of coolness and calmness shows that the consciousness is reorienting itself at a deeper level of the being. Joy and happiness not dependent upon outward things begins to manifest. One becomes aware that he is acted through and totally dependent upon the Divine.

This realization and accompanying release into peace and happiness is spoken of as liberation and carries with it the value of being released from jail. One begins to feel that the ordinary consciousness is something quite external and on the surface. It does not seem to be ones real self." Sri Aurobindo "The Life Divine"

The Four Great Yogic Sayings or "Mahavakyas" 1.) Consciousness [as manifest in an individual] is Brahman [God] 2.) I am Brahman [Consciousness] 3.) Thou Art That 4.) This Atman [the individual self] is Brahman 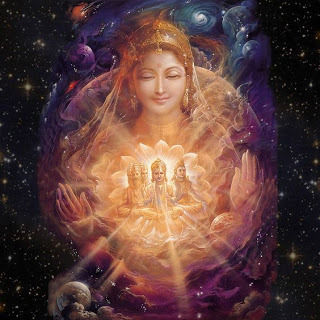