The basic oneness of the universe which was a part of the mystical experience of the Indian sages is one of the most important revelations of modern physics. Eminent scientists like John Wheeler point out that in modern science the distinction between observer and observed breaks down completely and instead of the "observer" we have to "put in its place the new word "participator". In some strange sense the universe is a participatory universe."

The Upanishads had taught the same lesson of the subject and the object fusing into a unified un-differentiated whole: "Where there is duality, as it were, there one sees another; there one smells another; there one taste another...But where everything has become just one's own self, then whereby and whom would one see? then whereby and whom would one smell? then whereby and whom would one taste ?" The intuition of Indian mystics led them to understand the multidimensional reality and of space-time continuum which is the basis of the modern theory of relativity. Vedanta taught the technique of self-development. The ultimate destiny of man is to discover within himself the true Self as the changless behind the changing, the eternal behind the ephemeral, and the infinite behind the finite. Greater wisdom was never compressed into three words than by the Chandogya Upanishad which proclaimed the true Self of man as part of the Infinite Spirit - tat twam asi: "That Thou Art". 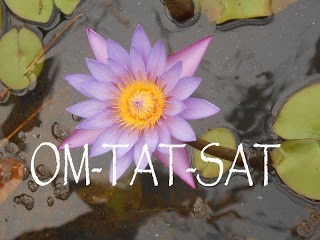