Hinduism is the religion of the Hindus, a name given to the Universal Religion, which is held supreme in India. It is the oldest of all living religions. This is not founded by any prophet. Buddhism, Christianity and Mohammedanism owe their origin to the prophets. Their dates are fixed. But no such date can be fixed for Hinduism. Hinduism is not born of the teachings of particular prophets. It is not based on a set of dogmas preached by a particular set of teachers. It is free from religious fanaticism.

Hinduism, unlike other religions, does not dogmatically assert that the final emancipation is possible only through its means and not through any other. It is only a means to an end and all means which will ultimately lead to the end are equally approved.

Hinduism allows absolute freedom to the rational mind of man. Hinduism never demands any undue restraint upon the freedom of human reason, the freedom of thought, feeling and will of man. It allows the widest freedom in the matters of faith and worship.

Hinduism is a religion of freedom. It allows absolute freedom to the human reason and heart with regard to questions such as nature of God, soul, creation, form of worship and the goal of life. Hinduism does not lie in the acceptance of any particular doctrine, nor in the observance of some particular rituals or form of worship. It does not force anybody to accept particular dogmas or forms of worship. It allows everybody to reflect, investigate, enquire and cogitate. Hence, all sort sorts of religious faiths, various forms of worship or Sadhana, and diverse kinds of rituals and customs, have found their honourable places side by side within Hinduism and are cultured and developed in harmonious relationship with one another.

Hinduism does not condemn those who deny God as the creator and ruler of the world, who do not accept the existence of an eternal soul and the state of Moksha or state of liberation. Hinduism does not render the upholders of such views unfit to be recognised as pious and honourable members of the Hindu religious society.

The religious hospitality of Hinduism is proverbial. Hinduism is extremely catholic and liberal. This is the fundamental feature of Hinduism. Hinduism pays respects to all religions. It does not dominate any other religion. It accepts and honours truth-wherever it may come from and whatever garb it may put on. .

Despite all the differences of metaphysical doctrines, modes of religious discipline and forms of ritualistic practices and social habits prevalent in the Hindu society, there is an essential uniformity in the conception of religion and in the outlook of life and the world, among all sections of Hindus. 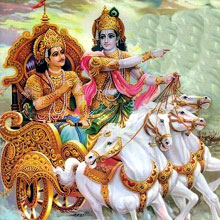