Sri Ramakrishna once told me that not one in twenty million in this world believes in God. I asked him why, and he told me, “Suppose there is a thief in this room, and he gets to know that there is a mass of gold in the next room, and only a very thin partition between the two rooms; what will be the condition of that thief?”

I answered, “He will not be able to sleep at all; his brain will be actively thinking of some means of getting at the gold, and he will think of nothing else.”

Then he replied, “Do you believe that a man could believe in God and not go mad to get Him? If a man sincerely believes that there is that immense, infinite mine of bliss, and that it can be reached, would not that man go mad in his struggle to reach it?” 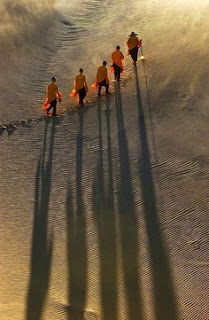