Panentheism From Wikipedia, the free encyclopedia

Shaktism, or Tantra, is regarded as an Indian prototype of Panentheism.[30] Shakti is considered to be the cosmos itself – she is the embodiment of energy and dynamism, and the motivating force behind all action and existence in the material universe. Shiva is her transcendent masculine aspect, providing the divine ground of all being. "There is no Shiva without Shakti, or Shakti without Shiva. The two ... in themselves are One."[31] Thus, it is She who becomes the time and space, the cosmos, it is She who becomes the five elements, and thus all animate life and inanimate forms. She is the primordial energy that holds all creation and destruction, all cycles of birth and death, all laws of cause and effect within Herself, and yet is greater than the sum total of all these. She is transcendent, but becomes immanent as the cosmos (Mula Prakriti). She, the Primordial Energy, directly becomes Matter 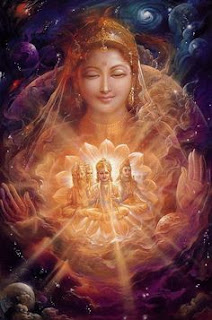