in the water, so also all these varied objects are reflected inthe vast mirror of our consciousness.

Even though bondage does not really exist, itbecomes strong through desire for worldly enjoyments;when this desire subsides bondage becomes weak.

Like waves rising up from the ocean the unstablemind rises out of the vast and stable expanse of the Supreme Self.

This world, though unreal, appears to existand is the cause of life-long suffering to an ignorant person, just as a (non-existent) ghost (is the cause offear) to a boy.

One who has no idea of gold sees only the bracelet.He does not at all have the idea that it is merely gold.

The world is full of misery to an ignorant manand full of bliss to a wise man. The world is dark to ablind man and bright to one who has eyes.

The bliss of a man of discrimination, who hasrejected samsara and discarded all mental concepts,constantly increases.

Like clouds which suddenly appear in a clearsky and as suddenly dissolve, the entire universe (appears)in the Self and (dissolves in it).

Just as the cloth, when investigated, is seen tobe nothing but thread, so also this world, when enquiredinto, is (seen to be) merely the Self. 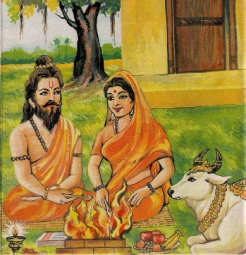