1. In the beginning this (world) was only the self, in the shape of a person. Looking around he saw nothing else than the self. He first said, ‘I am.’ Therefore arose the name of I. Therefore, even to this day when one is addressed he says first ‘This is I’ and then speaks whatever other name he may have. Because before all this, he burnt all evils, therefore he is a person. He who knows this, verily, burns up him who wishes to be before him.

2. He was afraid. Therefore one who is alone is afraid. This one then thought to himself, ‘since there is nothing else than myself, of what am I afraid?’ Thereupon his fear, verily, passed away, for, of what should he have been afraid? Assuredly it is from a second that fear arises.

3. He, verily, had no delight. Therefore he who is alone has no delight. He desired a second. He became as large as a woman and a man in close embrace. He caused that self to fall into two parts. From that arose husband and wife. Therefore, as Yajnavalkya used to say, this (body) is one half of oneself, like one of the two halves of a split pea. Therefore this space is filled by a wife. He became united with her. From that human beings were produced. 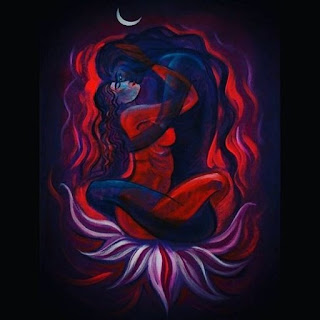