Vishnu, the protector of the world is admired as an embodiment of mercy and goodness, as the all embracing, self existent power that maintains the cosmic order. Most scriptures describe him as blue skinned to symbolize the infinite expanse of sky and ocean. While he is always considered the patient and forgiving one, he however does not tolerate ego. When the balance of good and bad is overthrown by evil, he incarnates in the human form to restore the right path.There are 10 avatars of Lord Vishnu called Dashavatar.**

Matsyavatara or the Fish incarnation is the first. In this form Vishnu saved the Saint Vaivaswata, the Hindu depiction of the biblical Noah or vice versa. Second is the Kurma or the Turtle incarnation, who during the famous episode of churning of the Ocean offered his back as a pivot to rest the Mountain of Mandara. Third incarnation of Vishnu, Varaha or the Boar incarnation recovered the stolen Vedas and released Earth from the bottom of the ocean. Vishnu killed the demon Hiranyakashyap who had the gift of immunity from by man, beast or god to save his devotee Prahalada, through his fourth incarnation as Narasimha, a half lion and half man appearance. Taking the form of Vamana or the Dwarf Vishnu killed the demon King Mahabali, who had gained dominion over the Earth and had chased away the gods from heaven. Sixth incarnation of Vishnu, Parshuram killed the King Kartavirya, who had stolen the holy cow Kamadhenu, which could grant all desires. Ram as we all know, the seventh incarnation of Vishnu killed the demon King Ravana.
Eighth incarnation of Vishnu as Krishna killed Kamsa, son of a demon and the tyrannical King of Mathura.
Ninth incarnation of Vishnu is believed to be the Buddha. Vishnu incarnated thus, to remove all the suffering from the world. While some Hindus seeing Buddha as a Vishnu incarnation, many other Hindus embrace Buddha as such and worship Buddha both in Buddhist temples as well as in Hindu temples. The tenth Incarnation of Vishnu, Kalki is still to come at the end of the Kaliyuga or decline of present, when Vishnu will appear in person on Earth, seated on a white horse, Kalki which is his tenth incarnation.
These ten incarnations are generally recognized as the most important Vishnu avatars, termed as Dashavatar while some sources also see other important figures of the Indian heritage as incarnations of Vishnu.
Thus, Vishnu is usually depicted holding a conch source of the primal sound OM, a discus symbolizing the cycle of time, a lotus as an example of glorious existence and liberation, a club to represent mental and physical strength.
Author Unknown 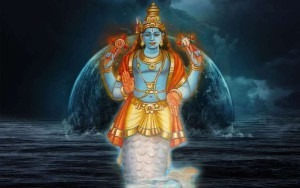