India’s great gift of higher knowledge to the world

Why Hindu dharma is the world’s most profound philosophical tradition

India’s great gift of higher knowledge to the world that remains at the cutting edge of science, spirituality and psychology today.

There has been much discussion about the nature of Hinduism as it is not always easy to understand for the modern person. The vastness and complexity of the Hindu tradition, as well as its differences from western religions, keeps it outside the usual definitions and dichotomies of western thought.
Most current discussions look at Hinduism according to its rituals or social practices. Though the yoga and vedanta side of Hindu dharma has spread worldwide, many people are not aware of how integral these spiritual practices are to the tradition as a whole.
Hindu dharma contains what is probably the world’s oldest and most extensive philosophical tradition, emphasising exalted spiritual philosophies of self-realisation and god-realisation. Its philosophies have predated and influenced the other philosophies of the world, East and West.
In this regard, we should look beyond the term Hinduism to its original meaning as Sanatana Dharma, which can be translated as the “eternal way of knowledge,” as the term dharma implies both wisdom and its application.
We should look beyond the idea of Hinduism as a religion like Biblical traditions and examine it as a science of consciousness.
Upanishadic wisdom of self-knowledge
Hindu philosophical texts like the Upanishads are older than those of the Greeks like Plato and Aristotle and predate the formation of Western philosophy.
They are in many respects more profound as they emphasise universal consciousness and cosmic intelligence and more notably, how to realise it, which western thought still does not understand.
They promote a level of inquiry and meditation that can take us much deeper into the mysteries of life than mere reason, philosophical dialectic, or religious faith and belief that western thought centers itself upon.
The Upanishads are older than the philosophical and theological texts of Christianity and Islam that are based upon Greek philosophers like Aristotle, Plato and Plotinus, though rejecting their pagan background.
Western religions relied upon the Greeks and Romans for their science, mathematics, art, architecture and medicine, from which modern western science and art arose again after the Renaissance that followed a return to pagan thought.
Hinduism has also sustained its older traditions of these types that continue today, asin Ayurveda, Jyotish and Vastu, Indian music and temple art. It has never rejected art, music or science as unholy. In fact, it has turned these into paths of Yoga.
Upanishadic texts emphasise the role of self-knowledge, much like the ancient Greeks. Yet the Upanishadic self-knowledge is not the knowledge of the mere human self, as is usually the case with the Greeks, but the inner self of pure consciousness beyond body and mind, karma and rebirth, which resides in all things.
Most of the theological discussions that occur in Christian philosophy, can be found in older Hindu texts, like the Brahma Sutras making God both the efficient and material cause of the universe, yet regarding the divine not as a God apart from nature, or limited to a particular savior or prophet, but as the very self of all beings.
Hindu thought emphasises the role of pure being or pure consciousness as the ground of existence, much like early Greek thought, while western thought since Aristotle has progressively moved into the transient realm of becoming, forgetting the primacy of the Eternal and Infinite for a more practical view of life.
This philosophical shift to the mundane has helped develop science and technology but has lost much of the world’s older spiritual, mystical and meditation traditions that have been remarkably preserved in India. 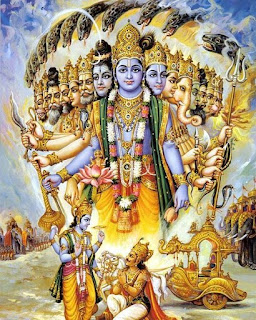