Hinduism On the Metaphysics & Philosophy of Hinduism Beliefs & Hindu Gods

The first collection of Indian philosophy that was written down was the Vedas. The word 'Veda' comes from the Sanskrit vid, meaning knowledge - the Vedas are 'sacred knowledge'. Their exact date is controversial, it is possible that the knowledge dates back 10,000 years BC, and were first written around 3,000 BC.

The metaphysical foundation of Hinduism, which is expressed in both the Vedas and the Upanishads is that Reality (Brahman) is One or Absolute, changeless, perfect and eternal. The ordinary human world of many separate and discrete (finite) things (which our mind represents by our senses) is an illusion. Through meditation and purity of mind, one can experience their true Self which is Brahman, God, the One infinite eternal thing which causes and connects the many things. True enlightenment is Self-realisation, to experience the supreme reality as Self.

The following mantra and quotes express the aspirations of Hinduism religion; 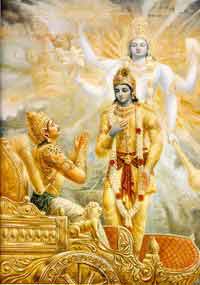 Though One, Brahman is the cause of the many.
Brahman is the unborn (aja) in whom all existing things abide. The One manifests as the many, the formless putting on forms. (Rig Veda)

Behold but One in all things; it is the second that leads you astray. (Kabir)

The word Brahman means growth and is suggestive of life, motion, progress. (Radhakrishnan)

Hindu cosmology is non-dualistic. Everything that is is Brahman. Brahman is the eternal Now, and in eternity there is no before or after, for everything is everywhere, always. To use the words of Pascal 'it is a circle the center of which is everywhere and the circumference nowhere.' (Sudhakar S.D, 1988) 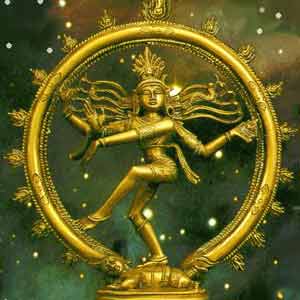 In Indian philosophy, the main terms used by Hindus and Buddhists have dynamic connotations. The word Brahman is derived from the Sanskrit root brih - to grow- and thus suggests a reality which is dynamic and alive. The Upanishads refer to Brahman as 'this unformed, immortal, moving', thus associating it with motion even though it transcends all forms.' The Rig Veda uses another term to express the dynamic character of the universe, the term Rita. This word comes from the root ri- to move. In its phenomenal aspect, the cosmic One is thus intrinsically dynamic, and the apprehension of its dynamic nature is basic to all schools of Eastern mysticism.
They all emphasize that the universe has to be grasped dynamically, as it moves, vibrates and dances. ..The Eastern mystics see the universe as an inseparable web, whose interconnections are dynamic and not static. The cosmic web is alive; it moves and grows and changes continually. (Fritjof Capra, 1972.)

In Hinduism, Shiva the Cosmic Dancer, is perhaps the most perfect personification of the dynamic universe. Through his dance, Shiva sustains the manifold phenomena in the world, unifying all things by immersing them in his rhythm and making them participate in the dance - a magnificent image of the dynamic unity of the Universe. (Capra, The Tao of Physics)