He IS all If we accept the foregoing, then we will take the next step and experience that "He alone is the reality." This can be understood more than one way. We can conclude that God alone is real and everything else is unreal. The problem with that is our tendency to equate "unreal" with non-existent, and wrongly belief that everything is only an illusion, that it has no reality whatsoever. The great non-dual philosopher Shankara explained the accurate view by likening our experience of things to that of a man who sees a rope in dim light and mistakes it for a snake, his mind even supplying eyes that glitter and a mouth that hisses at him. When light is brought, he sees that there is no snake, only a rope. The snake was not real, but his impression, however mistaken, was real. The snake was not real, it was nonexistent; but the impression of the snake was real and did exist. The rope was the reality and the snake was an illusion overlain on it. In the same way God is the reality and everything else is illusory like the snake. But illusion does exist. Denying it gets us nowhere; we have to deal with it by seeing through it, by dispelling it. Then we will see the reality: God. After that we can progress to the understanding that even though our interpretation may be wrong, what we perceive does have a real side to it, and that is God Himself. Hence, all things are God in their real side. The "wrong" side is in our mind alone. We can say that God is the reality of the unreal, which we need to see past. And that is the whole idea of the opening verse of the upanishad. He alone is real; He is all things. 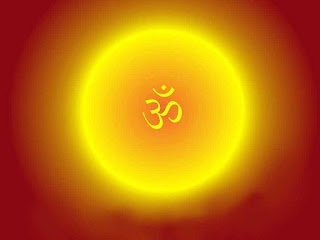