🕉️  “Though I was originally in the form of fire, my remaining now as a Hill of subdued Light is due to my grace in order to protect the world. Moreover, I ever abide here as a Siddha (*) (a sage named Arunagiri Yogi). Know that within me shine caves surging with many enjoyments (Bhogas)”.

(*)  It is believed that Shiva always abides at the top of the hill on its northern side in the form of an invisible Siddha.

🕉️  Since their (karma) nature is to bind all the worlds, the vicious actions (karmas) are bondage (runa). This Hill indeed is the effulgent Arunachala (A-runa-achala - the hill that destroys bondage), the refuge, by seeing which, they (the karmas) become non-existent.

🕉️ The Supreme Knowledge (self-knowledge), the import of Vedanta, which cannot be attained without undergoing great difficulty, will be easily attained by anyone if they see the form of this Hill from wherever It is visible or even if they think of it by mind from afar.

🕉️  By my ordinance, “I, the Lord, truly bestow my Sayujya - the state of non-dual union with Me, which is devoid of attachment, upon those who reside in this Holy place (sthala), which extends for three yojanas (*) (around this Hill), even without their receiving initiation and so on, which remove defects.” 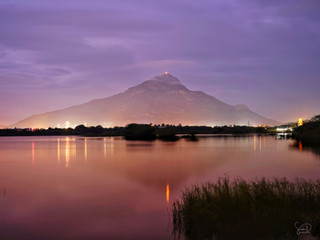