Māyā (/mɑːjɑː/) According to Adi Shankara, Māyā is the complex illusionary power of Brahman which causes the Brahman to be seen as the material world of separate forms. Maya has two main functions — one is to "hide" Brahman from ordinary human perception, and the other is to present the material world in its (Brahmam) place. Māyā is also said to be indescribable, though it may be said that all sense data entering ones awareness via the five senses are Māyā, since the fundamental reality underlying sensory perception is completely hidden. It is also said that Māyā is neither completely real nor completely unreal, hence indescribable. Its shelter is Brahman, but Brahman itself is untouched by the illusion of Māyā, just as a magician is not tricked by his own magic. Māyā is temporary and is transcended with "true knowledge," or perception of the more fundamental reality which permeates Māyā. 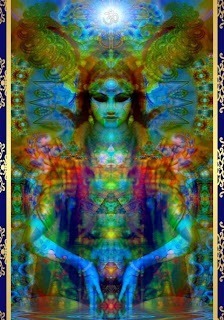