One of several interpretations of Vedānta Hinduism (see Vedānta), Advaita Vedānta (see Advaita) was developed probably in the eighth and ninth centuries CE by the philosopher Śaṇkara. For followers of this branch of the religion, Brahman (see Brahman) is the Absolute, the undifferentiated reality underlying all apparent reality. Even the differentiation between the individual (or self) and Brahman is ultimately illusory. The proper path for humans is to discover the oneness of the self (see Ātman) and Brahman. With this realization the individual achieves mokş (see Mokṣa) or release from the illusory state of worldly entanglements (see Saṃsāra).

According to Adi Shankara, God, the Supreme Cosmic Spirit or Brahman (pronounced [ˈbrəh.mən]; nominative singular Brahma, Sanskrit pronunciation: [ˈbrəh.mə]) is the One, the whole and the only reality. Other than Brahman, everything else, including the universe, material objects and individuals, are false. Brahman is at best described as that infinite, omnipresent, omnipotent, incorporeal, impersonal, transcendent reality that is the divine ground of all Being. Brahman is often described as neti neti meaning "not this, not this" because Brahman cannot be correctly described as this or that. 'It' (grammatically neutral, but exceptionally treated as masculine) is the origin of this and that, the origin of forces, substances, all of existence, the undefined, the basis of all, unborn, the essential truth, unchanging, eternal, the absolute. How can it be properly described as something in the material world when itself is the basis of reality? Brahman is also beyond the senses, it would be akin a blind man trying to correctly describe color. It, though not necessarily a form of physical matter, is the substrate of the material world, which in turn is its illusory transformation. Brahman is not the effect of the world. Brahman is said to be the purest knowledge itself, and is illuminant like a source of infinite light. 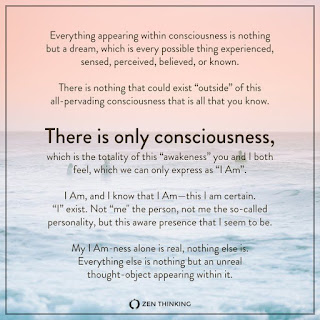