It is the very nature of the soul or the psychic being to turn towards the Divine Truth as the sunflower to the sun; it accepts and clings to all that is divine or progressing towards divinity and draws back from all that is a perversion or a denial of it, from all that is false and undivine. Yet the soul is at first but a spark and then a little flame of godhead burning in the midst of a great darkness; for the most part it is veiled in its inner sanctum and to reveal itself it has to call on the mind, the life-force and the physical consciousness and persuade them, as best they can, to express it; ordinarily, it succeeds at most in suffuring their outwardness with its inner light and modifying with its purifying fineness their dark obscurities or their coarser mixture.

Even when there is a formed psychic being, able to express itself with some directness in life, it is still in all but a few a smaller portion of the being ~ "no bigger in the mass of the body than the thumb of a man" was the image used by the ancient seers -and it is not always able to prevail against the obscurity and ignorant smallness of the physical consciousness, the mistaken surenesses of the mind or the arrogance and vehemence of the vital nature.

This soul is obliged to accept the human mental, emotive, sensational life as it is, its relations, its activities, its cherished forms and figures; it has to labour to disengage and increase the divine element in all this relative truth mixed with continual falsifying error, this love turned to the uses of the animal body or the satisfaction of the vital ego, this life of an average manhood shot with rare and pale glimpses of Godhead and the darker luridities of the demon and the brute.

Unerring in the essence of its will, it is obliged often under the pressure of its instruments to submit to mistakes of action, wrong placement of feeling, wrong choice of person, errors in the exact form of its will, in the circumstances of its expression of the infallible inner ideal. Yet is there a divination within it which makes it a surer guide than the reason or than even the highest desire, and through apparent errors and stumblings its voice can still lead better than the precise intellect and the considering mental judgment.

This voice of the soul is not what we call conscience -for that is only a mental and often conventional erring substitute; it is a deeper and more seldom heard call; yet to follow it when heard is wisest: even, it is better to wander at the call of one's soul than to go apparently straight with the reason and the outward moral mentor. But it is only when the life turns towards the Divine that the soul can truly come forward and impose its power on the outer members; for, itself a spark of the Divine, to grow in flame towards the Divine is its true life and its very reason of existence. 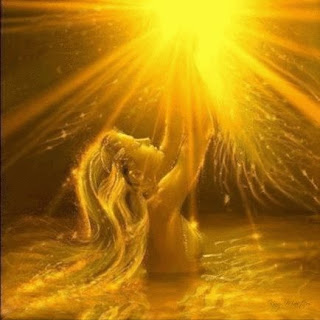