"Lord, though by your grace I have reached the state of self-fulfillment, I am eager to know more about one thing. Pray enlighten me. What is the method of worshiping the Lord which destroys all sins and promotes all auspiciousness?"

"God is not Vishnu, Shiva or Brahma; not the wind, the sun or the moon; not the brahmana or the king; nor I nor you; not Lakshmi nor the mind (intellect)."

"God is without form and undivided; that splendor (devanam) which is not made and which has neither beginning nor end is known as God (Deva) or Lord Shiva which is Pure Consciousness."

The latter yields finite results but the former bestows infinite bliss. He who ignores the infinite and is devoted to the finite abandons a pleasure-garden and seeks the thorny bush. However, sages sometimes worship a form playfully."

"Now for the articles used in the worship: Wisdom, Self-control and the Perception of the Self in all beings are the foremost among those articles."

"The Self (Consciousness) alone is Lord Shiva who is fit to be worshiped at all times with the flowers of Wisdom."

"Indeed only that cid-akasha (the Infinite Space of Consciousness), which alone exists even after the cosmic dissolution, exists even now, utterly devoid of objectivity.

The concepts and notions that are illumined by the Consciousness within itself shine as this Creation, on account of the movement of Energy within Consciousness, precisely as dreams arise during sleep.

Otherwise, it is totally impossible for an object of perception to exist outside of the Omnipresent Infinite Consciousness."

Nothing really happens in both these states.

That is the Lord,

That is the Supreme Truth,

That I Am and 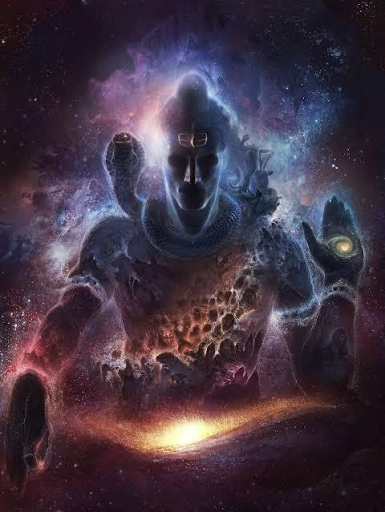