The source of visible light is the sun. But what exactly is the sun? Physicists say that it is a kind of giant incinerator, at the centre of which the temperature is about fifteen million degrees, and that this heat is produced by a constant process of atomic fusion in which hydrogen is transformed into helium. In fact, though, only the great initiates who have the power of projecting their astral bodies into space have actually been to the sun and the other planets and have firsthand knowledge of what they really are.

I have often spoken to you about the sun and, in particular, I have told you that modern science tells us that sunbeams are streams of photons, but that initiates see them as tiny wagons laden with food. Sunbeams do not arrive on earth empty-handed: wherever they go throughout space, they take with them all the elements necessary to the life and growth of plants, animals and men, but they also convey many much subtler elements that we can use to further our spiritual development.
Yes, sunbeams can be compared to miniature wagons carrying supplies of food. In an extraordinary, circular flow of traffic, they come down to earth at a tremendous speed, empty themselves of their precious load, and return to the sun by an invisible route. And these wagons carry not only supplies but also passengers, beings who have been sent to earth for some particular task and, when it is done, they too return to the sun to recuperate and refresh themselves.
All this is new to you, isn’t it? But there is something else that you don’t know either, and that is that this circulation of the sun’s rays in space finds its replica in man.1 Our heart is the sun, and it sends wagonfuls of rays out into the different regions of the physical body and its millions upon millions of citizens. When the wagons reach their destination they unload their supplies and, as they have inevitably lost something of their initial purity, before going back to the sun they follow a circuitous route to purify themselves and get rid of the wastes accumulated on the way.
The circulation of the blood in the veins and arteries of our bodies is simply a reflection of the circulation of sunlight in space. For the solar system is a body: the sun is the heart and light is the blood which this heart pumps out to the members and organs of the body for their nourishment. The rays of the sun reach out into space and touch the earth and the other planets, their oceans, their atmosphere and all the creatures that dwell therein, and supply them with everything they need. 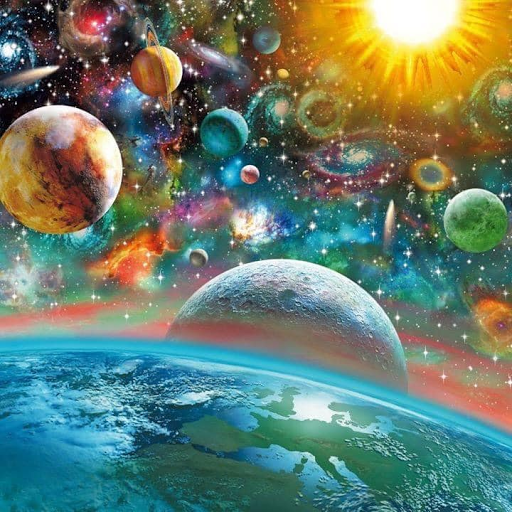