(Hidden way across the threshold) The Spirit of Sophia - Wisdom Library

In the creation of man , God makes one whole and perfect being , formed of two distinct parts . Adam the earthly , exterior man , and Eve the spiritual , interior one , the Soul and living Mother . These two are joined together perfectly as one creature and made for the time being indispensable to each other , not alone in the exterior objective sense , but in the inner Soul - sense of each single individual . The first Adam is of the earth earthy , and liable to death ; the second Adam is from heaven and triumphant over death , for sin ( that is , error in acting against the Spirit ) has no more dominion over him . He is therefore the product of a Soul born again , purified from defilement by matter , and released from subjection to the animal body . Such a Soul is a ripened , perfected Soul called Virgin , symbolized in Egyptian sculpture by a winged globe . She has for her spouse no longer matter , but the Divine Spirit , Love of the Absolute , which is God , and man born of this union is the image of God , and is God - made man , that is , he is Christ . It is the Christ thus born in every man which redeems him and endows him with eternal Life , for in Him the man becomes transmuted from matter into Spirit . He , the man , by regeneration becomes a Son at once of man and of God . The character or man thus reborn is only begotten of God , because God begets none of any other kind . Of such men as these are the saints who inherit the earth , and under their rule is the new Jerusalem , or state of Soul and Spirit perfection which cometh from heaven ; that city which has God for its Sun ; which has no temple , because every man is himself a living temple , a house of God , not made with hands , eternal in the heavens. 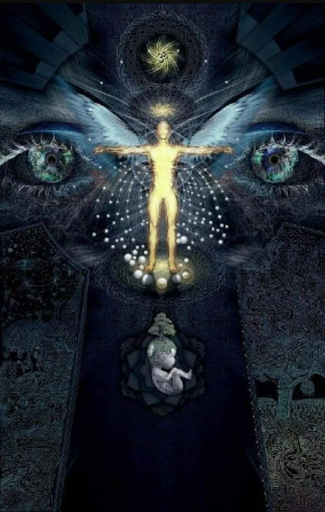