Brahman or the Supreme Self is beyond time and space, causation. He is limitless. He is tranquil. He shines with equal effulgence in all bodies. He cannot be any particular thing. He is Chaitanya or pure consciousness. He is Vastu, Atman or Brahman or the Supreme Self is the hidden treasure. It is the jewel of jewels. It is gem of gems. It is the imperishable, inexhaustible supreme wealth, which no dacoit can rob. It is Chintamani of Chintamanis that will give man whatever he wishes.

Who Himself sees all, Whom no one beholds, Who illumines the intellect, etc., but Whom they cannot illumine-that is Brahman. That is Atman.

The self-shining pure being, Who is the support of this universe, Who is consciousness itself, Who is Bliss Absolute, Who is changeless is Brahman.

A supreme principle exists. It is Atman. It is Para Brahman. It is imperishable, unborn, undecaying and undying. It is ancient. It is one. It is a mass of wisdom and bliss.

That unheard hearer, that unseen seer, that unthought thinker, that unknown knower is Brahman.

Atman is eternal (Nitya). It is unchanging (Nirvikara). It is one mass of knowledge (Prajnana Ghana, Chidghana, Vijnanaghana). It is imperishable (Akshara).

Atman or the pure spirit is timeless, spaceless, placeless and endless. It is full of Jnana (Jnana Maya). It is Santa and self-luminous (Svayam Jyoti). It is Jyotirmaya (full of light). All students of Vedanta seek this Atman to get Brahmanubhava. It is called Parama Vastu (supreme thing). It gives immortality.

That in which there is neither East nor West, neither light nor darkness, neither pleasure nor pain, neither hunger nor thirst, neither Harsha nor Soka, neither gain nor loss is Brahman.

The Atman has no body. It is Atanu, Nirakara. How can there be then Jara (old age) and death for Atman? Atman is Ajara, Amara, Avinasi (undecaying, immortal and indestructible).

The Soul (Atman) is not a product like mind, body or sugar-candy. Eternal intelligence constitutes its very nature. The individual soul is identical with the Highest Self (Brahman).

Atman (Highest Self) is always the witnessing subject in all cognition, because it is infinite and self-luminous. It is not manifested either by itself or by anything else. It is known or revealed through direct perception or immediate intuitional knowledge, Aparokshatvat.

The intellect can conceive of Brahman as Sat-Chit-Ananda. That is the reason why these attributes are ascribed to Him. But Brahman is different from Satchidananda also. This does not mean that Brahman is non-entity or zero, a negative concept or metaphysical abstraction. He is the only Reality or living Truth. He is Being. He is essence.

Mind always runs after pleasure because it is born of Ananda (Brahman). You love a mango because it affords you pleasure. Amongst all things, you love your own Self most. This love of the Self gives the clue to the fact that Ananda or bliss must be the nature of the Self.

That secondless Supreme Being who resides in the chambers of your hearts as Antaryamin or Inner Ruler or controller or Sutradhara or Sakshi (silent witness), Antaratma (inner Self) who has no beginning, middle or end, who is the source for this world, Vedas, body, mind, Indriyas and Pranas, who is All-pervading, who is unchanging, who is the One homogeneous Essence (Ekarasa), who exists in the past, present and future, who is Self-existent Svayambhu, who is Svatantra (independent) and who is self-luminous (Svayam Jyoti) is God or Atman or Brahman or Purusha or Chaitanya or Purushottama.

Atman is different from the knowable. He is beyond the unknowable also. He is incomprehensible. This does not mean that he is a non-entity or void or a negative concept or a metaphysical abstraction. He is a mass of knowledge or pure consciousness. Consciousness is more dense than stone or platinum or gold. He is the only real, living entity, the substratum for everything.

Soul or Supreme Self or Atman or Brahman is that abiding, constantly existing and imperishable entity which is the basis for this world, which is indivisible self-luminous, unchanging and all-pervading, which is the silent witness or Sakshi of the three states viz., waking, dreaming and deep sleep. The knower of this Soul or Atman attains immortality and enters the abode of bliss and nectar.

Brahman is known also by the names Atman or Purusha. Purusha is so-called because of His lying in the body, or because He is full in Himself, or because all that we see is pervaded by Him.

Brahman or Atman or the Supreme Self is self-luminous. Brahman cannot be manifested anything else. Brahman manifests everything. The doctrine of self-luminosity is one of the foundational tenets on which the entire edifice of Vedanta is constructed. Atman gives light to the sun, the moon, the stars, the lightning, the fire, the intellect and the senses. By the light of Atman all these shine but they cannot illumine Atman.

Atman alone exists. It appears as the objects which we cognise just as a rope appears as a serpent. Atman puts on the appearance of these phenomenal objects. It shines by itself. It is self-luminous. All the objects shine after them i.e., they borrow their light from the self-effulgent Atman. 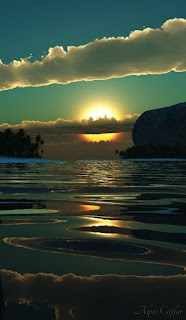