To the worshipper of Shakti, the material world is not a veil of illusion to be removed with the dawn of enlightenment, nor is it something to be left behind in course of one's journey to the Absolute. The core doctrine of the Shakta system which aims at the integration of enjoyment and liberation is that of 'here and this’'. The world we live in is verily a play of dynamic energy within the heart of the Absolute whose essence is pure Consciousness-Force (पराचिति) vested with the Will of Freedom. It is an outpour of Ananda or the Bliss aspect of the Divine Mother who pulsates with the intensity of Love and the reflexive awareness of perfect ‘I’-hood. Every thing that exists here is but an expression of some potential of self manifestation within her infinite nature. Wealth, that is often looked upon as a tempting force of evil is but the Mother herself as Lakshmi. All forms of art and skill, that in most systems are to be abandoned for the sake of spiritual pursuits, are  but tdshe gifts of the same Mother as Sarasvati.  All accomplishments, worldly or otherwise, come with the grace of Ganesha, the Mother's own embodiment of perfection. She is also the valour, courage and heroic temperament that are required in the pursuit of life's mission in her aspect as Kartikeya. All cosmic forces functioning as various gods and goddesses are but instruments through which the Divine Mother governs her creation. That is why they all get reduced to the weapons in her hands. Vishnu, who supports the world in the form of Yajna and Dharma is her mount in the form of a gigantic lion upon whom she places her right foot. Even the dark sheath of ignorance that imprisons the individual self has a place in her universal design since it is the dark buffalo body that hides the pure self which is Shiva himself, thereby giving him the form of an asura immersed in limited egoity. This bound Shiva or Mahishasura too finds his place benath her left foot as he sees himself eternally connected with the universe and the Universal Mother.  Thus making the aspirant experience every single object in the world as nothing but Herself, Shakti as  Kundalinitakes him/her to the point of non duality in the Sahasrara lotus where She unites with the Supreme Shiva, her own aspect as the static pole of Reality.However, what distinguishes the stasis of Shiva from that of Brahman in monistic Vedanta is that the former always (even in the state of absolute transcendence) exists in indistinguishable union with the dynamic Consciousness-Force which though embraces all objects in the universe, also transcends them all. Hence, even when Shiva is fully absorbed in his state of pure transcendental trance, he is  experiencing the pure blissful dynamism of Shakti within his own heart in the state of perfect equilibrium. In other words, this pure equilibrium of Shakti's dynamism is verily the absolute stasis of Shiva. Again, when with his eyes open, he is gazing outside, the same Shakti is seen playing in innumerable modes and forms luxuriating in the Rasa of Jagadananda or divine bliss in the form of universal manifestation as an enactment of the Vedic saying ‘All this is verily Brahman’ (सर्वं खलु इदं ब्रह्म) . It is then that the Supreme Shakti who pulsates within the stillness of the deep ocean of Shiva's quintessential Consciousness surges up as Vak proclaiming,अहमेव वात इव प्र वाम्यारभमाणा भुवनानि विश्वा ।परो दिवा पर एना पृथिव्यैतावती महिना सं बभूव ॥Like mighty winds, unbound and free, I alone roam all over the universe in innumerable forms, though in essence I am beyond heaven and earth. Such is My magnitude.Such being the nature of the world, it is not an illusion caused by Maya, but the play of Mahamaya who is Truth par excellence. 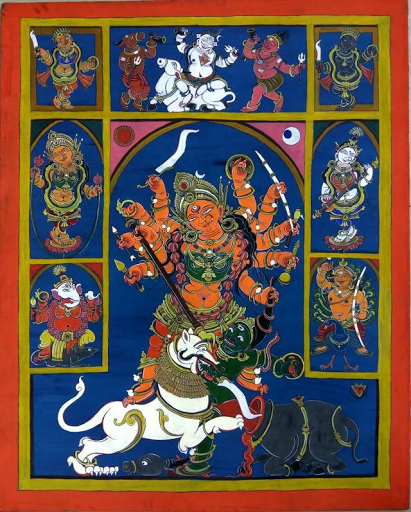