The unreal (asat) has no existence and

the real (sat) never ceases to exist.
The relative reality of both (sat and asat)
has been perceived by
the seers of the ultimate truth.
Bhagavad Gita ,Chapter :2, Shloka:16
This verse reads like a riddle.
It is told that Lord Ganesha
who was writing down
when Vyasamaharshi was dictating Mahabharata,
had put a condition.
The condition was that he
would continue writing only so long as
Vyasa was able to dictate continuously
without pausing even for a minute.
Vyasa had also put a counter condition that
Ganesa should not proceed ahead with
writing until and unless he thoroughly
understood the meaning of the verse
under dictation.
So, Vyasa deliberately introduced some riddle-
like verses in Bhagavad Gita
(which was part of Mahabharata)
so that by the time Ganesa paused to think
of the meaning of such a verse,
Vyasa was able to gather his
thoughts for further dictation.
In the classical texts,
the following is the example given
to define an ‘Asat” or unreal object:-
“There goes the son of a barren woman
with his head adorned by flowers grown
in the sky and carrying a horn of rabbit”.
Here, there cannot be the son of a
barren woman who is an asat
but you may see one in your dream.
Similarly the flower in the sky as also
the horn of a rabbit are unreal objects and
cannot have an existence
of their own except in a dream or imagination.
Here, Asat refers to the body and
also to opposite pairs (Dvandvas) like heat and cold,
pleasure and pain etc.
These ‘Asat’ objects have no existence of their own.
They are all products of the mind imagined
due to past conditioning.
The body is thus a superimposition
like the dream objects seen in a dream.
If a pot is made up of clay,
pot is only a transformation of clay.
It is the clay which was its material cause
and it only sustains the form of a pot.
So a pot is called ‘asat’.
Pot is a name given to a transformed form of clay.
The pot has no true existence as such.
By ‘Sat’ is meant the final truth i.e. the Atman (Self).
As it is all pervasive and ever present in all beings,
there is no time or space where the Self ceases to exist.
It is the seers of yore who,
as result of their Self-enquiry and Self-relaisation,
were able to come to their firm conclusion
about the distinction between
Self and non-Self
which are known as Sat and Asat respectively
(as per Sankara Bhashya on Gita).
“Yes it is like a cinema show.
You are the screen.
The Self has created the ego,
the ego has its accretion of thoughts
which are displayed as the world,
the trees, plants, etc.,
of which you are asking.
In reality,
all these are nothing
but the Self,
the same will be found to be all,
everywhere and always.
Nothing but the Self exists.”
(Talk with Sri Ramana Maharshi No. 13).
This verse has been quoted verbatim
by Bhagavan Ramana in talk No 203 also.
~ From Gita Sarah book
(Commentary on the slokas of Bhagavad Gita selected
by Bhagavan Ramana Maharshi) 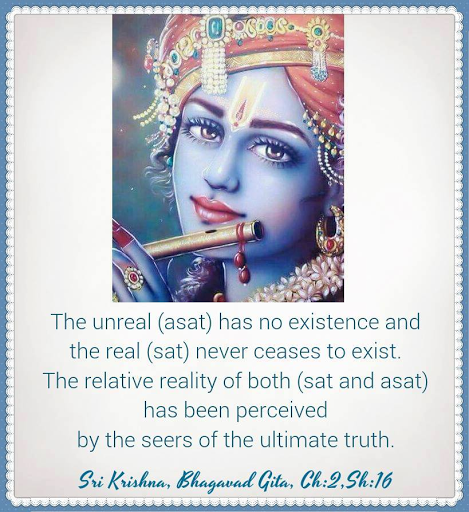