Hindus refer to their religion as sanatama dharma or the eternal religion. Vedanta is one of six systems or darshanas within Hinduism. Vivekananda (1863 – 1902) introduced Vedanta to the West in 1893 at The Parliament of Religions at the Chicago World’s Fair. At the conference, Vivekananda spoke of his teacher, Ramakrishna (1836 – 1886), who compiled a universal version of Vedanta that appealed to western thinking. He excluded thousands of Hindu gods, hundreds of rituals, and the caste system. Additionally, Ramakrishna’s translations of Sanskrit texts allowed Vedic knowledge to spread throughout the world.

Vedic source materials include the Upanishads, Bhagavad Gita and Brahma Sutras. Ramakrishna’s revised discourses allowed readers to interpret the original spirit of Vedanta. The four Vedas include: Yajur, Rig, Arthava, and Sama which are the underlying foundations of Hinduism. Popular practices include meditation and transcendence of the physical world. The primary goal is to experience the universal nature of “being and non-being.” Vedanta is known as a universal philosophy that leads to “the end of all knowledge.”

Each of the four Vedas include a section of collective writings known as the Upanishads. These teachings are the foundations of Vedanta. The Upanishads teach ethical principles, and how to purify one’s karma by achieving the state of ananda or joy, bliss, and happiness. The Upanishads also explain esoteric teachings of cosmology and mysticism.

The Vedas introduce the concept of Brahman, which is the Eternal Reality. Brahman can only be described in negatives such as incomprehensible and unknowable. Torwesten (1991) describes Brahman as representing the highest good.

The Upanishads emphasize the concept of Tat tvam asi or “That – thou art.” This phrase conveys the meaning that one’s essence and Brahman are the same. Additionally, “That – Thou art” connotes a direct connection between the microcosm and macrocosm. The declaration from the Hebrew Bible, ‘I Am That I am’ (Ex. 3.14) has a similar meaning.

In Vedanta, jnana yoga is the study of ancient wisdom. Vedantins on this path are not concerned with going to heaven, worshipping deities, performing rituals, offering sacrifices, or participating in devotional practices. For Vedantins, the most important goal is attaining knowledge and meditating on “who am I?” and “why do I exist?” Additionally, devotees want to expend their karma and free themselves from the cycle of rebirth. To achieve this goal, they must “self-realize” and experience a direct connection with Brahman.

The concept of Brahman has changed over time. Its original meaning was to “swell, expand, or increase,” but this definition has changed over time. Today it means, “the opposite of illusion” or “sacred word” (Torwesten, 1991). Brahman also refers to the power of mystical sounds that “cause something to happen” during a ritual or sacrifice.

In Hinduism, Brahma (different from Brahman) is known as the “creator-god.” He is the first god in the Hindu trinity, which also includes Vishnu and Shiva. In the spiritual hierarchy, Brahma is one level below prakriti or nature’s potential. Brahma’s primary function is to create a universe at the beginning of each cosmic cycle. Thereafter, Vishnu and Shiva hold the powers to preserve, destroy, and regenerate life.

Shankara (founder of Advaita-Vedanta) posited that Brahman does not transform itself into anything. All of creation and the universe are maya (illusion), which is separate from Brahman. Shankara describes Brahman as one, changeless, Eternal Reality. The Isha Upanishad speaks of Brahman’s transcendental fullness, and its separation from the universe: “Aum. That is full, this is full. This fullness has been projected from that fullness. When this fullness merges with that fullness, all that remains is fullness” (Torwesten, 1991).

In the Upanishads, the “word symbol” for Brahman is AUM. It is a sacred sound with three letters that represent three consecutive states of “waking, dreaming, and deep sleep.” AUM is the link between the mortal and divine worlds. During deep meditation both worlds are united. AUM is only defined in negatives: “unperceived, unrelated, incomprehensible, unthinkable, and indescribable” (Torwesten, 1999). When devotees chant the sound AUM, their goal is to transcend duality and experience oneness with the Eternal Reality. This phenomenon is known as the mystical experience: “The infinite becomes the word, thus taking root in the human heart, and what is inmost in the heart expands.” Achieving this state of transcendence, leads the devotee toward self-realization. 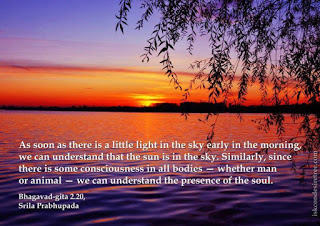