The only truth is that God alone is real and all else is unreal. Men, universe, a shelter, rearing children—all these are magic composed by the Supreme magician. The magician strikes his wand and says: “Come delusion! Come confusion!” Then he says to the audience, See past the illusion and let your wings take wind. But the magician alone is real and his magic unreal. The unreal exists for a second and then vanishes. Shiva was seated on Kailas. His companion Nandi was near Him. Suddenly a terrific noise arose. “Revered sir,” asked Nandi “what does that mean?” Shiva said: “Ravana is born. That is the meaning!” A few moments later another terrific noise roared. “Now what is this noise?” Nandi asked. Shiva said with a smile, “Ravana is dead.” Birth and death are an illusion. You see the magic for a second and then it disappears.
God alone is real and all else unreal. Water alone is real; its bubbles appear and disappear. They disappear into the very water from which they rise. 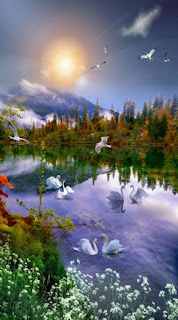