Brahma, not to be confused with BRAHMAN

Brahma, the creator of the universe is depicted as the four headed god, literally overseeing the whole world. Unlike the others, he does not carry weapons. The lotus in one of his hands symbolizes essence of all living beings on earth, while string of beads or the rudraskamala in the other serves to keep track of the universe’s time. The count of all the beads on the string equals one cycle of the universe. So here’s the math if you want to set the watch accordingly. One cycle of the universe equals 100 god years which are 311 trillion and 40 billion years on earth.
The creation of the universe is an interesting narrative enacted by Brahma. It is believed that In order to create the human race he crafted a goddess out of himself named Gayatri more eminently known as Saraswati. Humiliated by this odd episode, when Saraswati tried to hide herself Brahma grew the extra pairs of head to look for her. He initially developed five heads but lost one when Lord Shiva cut off one of his head in anger for accepting Paada Pooja from Parvati Devi, who performed the Paada Puja mistaking Brahma for Shiva. This incident is referred to as Brahma Kapalam.
The four Vedas are said to have sprung from his heads. Brahma also created the seers popular in most scriptures Marici, Angiras, Vashishta, Bhrgu and Narada, who referred to as his intellectual sons, while from his body surfaced the nine sons representing integrity, anger, greed, lust, delusion, repudiation candor, joy and death, the nine junctures of human journey. 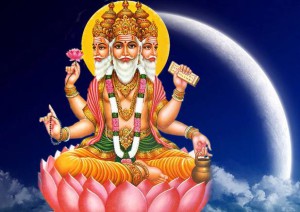