TURIYA or the Fourth State by Swami Sivananda

TURIYA or the fourth state is that state in which the individual soul rests in his own Sat-Chit-Ananda Svarupa or the highest Brahmic consciousness during Nirvikalpa Samadhi. There are three states, Jagrat, Svapna and Sushupti, for a Jiva who is whirling in the mire of Samsara. Turiya is that state which transcends all these three states. Hence the Turiya or the fourth. Turiya is Atman or Brahman.

Brahman is Sat-Chit-Ananda Vigraha or the embodiment of knowledge and bliss. He has no beginning or end. He is the cause of all causes. He is the shelter, support and the Lord for all.

There are two paths in Yoga to realise the Self viz., the Pipeelika Marga and the Vihanga Marga. Just as the ant slowly marches, so also the aspirant slowly marches on in the spiritual path. He practises Karma Yoga to purify his heart and then takes up Upasana to steady his mind. Finally he treads the path of Jnana Yoga and eventually reaches the goal of life. This is Pipeelika Marga or the ant-path. Just as the bird flies in the sky at once, so also the aspirant of the first class type at once practises Jnana Yoga and attains knowledge of the Self. This is the Vihanga Marga or the bird-path.

Man can be compared to a plant. He grows and flourishes like a plant and dies at the end but not completely. The plant also grows, flourishes and dies at the end. It leaves behind the seed which produces a new plant. Man leaves when dying his Karma behind, the good and bad actions of his life. The physical body may die and disintegrate but the impressions of his actions do not die. He has to take birth again to enjoy the fruits of these actions. No life can be the first for it is the fruit of previous actions, nor the last, for its actions must be expiated in the next following life. Therefore, Samsara or phenomenal existence is without beginning and end. But there is no Samsara for a Jivanmukta or liberated sage who is resting in his own Sat-Chit-Ananda Svarupa. Man destroys the Samskaras which bring him again and again in this earth to reap the fruits of his actions by acquiring knowledge of the Self and becomes free.

Have a deep study of the Upanishads. In the whole world there is no study so inspiring and so beneficial as that of the Upanishads. Every Mantra is pregnant with deep, original, sublime and soul-stirring thoughts. They are the products of the highest wisdom of the ancient Rishis of India. They bring solace, inner strength, peace and courage to the readers. They infuse hope to the hopeless, strength to the weak, joy to the joyless and serenity to the restless. The system of Vedanta takes its origin from the Upanishads which contain the ancient wisdom of the sages of yore. A deep study of these wonderful Upanishads will clearly indicate as to what magnanimous heights those Rishis of yore had climbed in the spiritual ladder. The Western scholars and philosophers pay their homage to the Rishis and appreciate the grandeur and originality of the Upanishads.

Do not argue. Give up lingual warfare, intellectual gymnastics and quibbling. You will be nowhere if you enter into disputations and discussions. Have living faith or unshakable conviction in the existence of the immoral, All-pervading Brahman or the Eternal, the words of your preceptor and the Srutis. Learn from your preceptor the fundamental tenets of Advaita Vedanta. The Advaita Vedantin admits six Pramanas but the final court-of-appeal for him is the Srutis. Srutis contain the inspired revelations and experiences of realised sages. He always opens his Vedantic discourses in the following manner. Sruti Bhagavati says, Ekameva Advitiyam Brahma, Ekam Sat Viprah Bahudha Vadanti, Sarvam Khalvidam Brahma, etc. To understand and know the Truth, much logic and argumentation is not necessary. Truth is very simple. It can be realised by simple meditation. Intellect is a finite instrument only. It is an automatic and routine faculty. It is not self-sustained and self-luminous. It will betray you. Intuition only is infallible or unerring.

Those aspirants who are well qualified and well equipped will be really benefited in the path of renunciation or Nivrittimarga. Many renounce the world and take to Sannyasa in their temporary zeal. They do not make progress in the spiritual path, because they lack the preparation and qualifications without which spiritual life is not possible.

The man who sits by calming the mind, who does nothing at all physically, is the most active man in the whole world; whereas that man who runs hither and thither and who is always very busy, does nothing in substance. This may be paradoxical to you. Very few can comprehend this.

Husk is natural to rice and rust to copper, yet they disappear through efforts! Evan so Ajnana which clings to the Jiva or individual soul can be made to disappear through the ceaseless Atmic enquiry. Destroy the Avidya. May you rest incomparably firm in your own Self!

Do not mistake Tandri for Savikalpa Samadhi and deep-sleep for Nirvikalpa. The glory of the state of Turiya or Bhuma is ineffable. Its splendour is indescribable. If the body is light, if the mind is clear if there is cheerfulness, know that you are meditating. If the body is heavy, if the mind is dull, know that you were sleeping while meditating.

Through ignorance and lust comes death. Through knowledge the deathless state or the immortal Atman is reached. Both life eternal and death abide in the body. Life is a lightning flash or breath. Time is but a thunder-clap of death. Live in Atman. You will attain immortality. Go beyond time. You will attain eternity.

Withdraw the Indriyas. Meditate. Live in the Self. Your whole being will be uplifted into a kind of rapturous delight or mystic ecstasy. You will feel the divine thrill of joy. Wonderful peace will envelop you. You will be drowned in the ocean of bliss. All desires will melt into nothingness all names and forms will vanish. You will behold the Self only everywhere. This wonderful state is indescribable. You will have to feel it yourself. Just as the dumb man cannot express his feeling of joy when he tastes the sugar-candy, so also you cannot express the bliss of Samadhi or Union with the Supreme Self. Words are finite to describe this state. Language is imperfect to express this experience. It is the language of the supreme silence. It is the supreme stillness of the immortal soul. It is the peace that passeth all understanding. This is Turiya or the fourth state.

May Turiya be your centre, ideal and goal!! 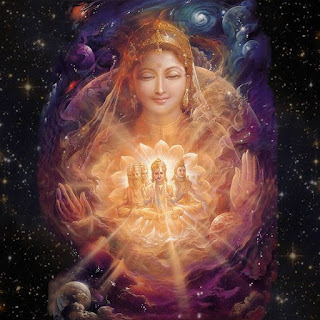