KUNDALINI
God dwells in both the male and the female form at two opposite ends within every human body. Over the crown of the head is a subtle, invisible point called SahasrÄra where male divine, Shiva, dwells. Down at the end of spinal column is another subtle, invisible point called MulÄdhar (the supporting root of the body) where Goddess Kundalini dwells. Between these two divine centers there are six subtle, invisible chakras — cosmic energy hubs — which are placed vertically upon each other at brief intervals in a subtle column called SushumanÄ� that runs parallel to the physical spinal column. These chakras start upward from the point near the bottom of the spinal column and then go up to the throat. Beyond the throat chakra is another key point at the centre of the forehead (a little over the point between eyebrows), which is called Ä€jnachakra or the Third Eye. All the six chakras are connected with a vast but invisible network of 72,000 NÄ�dis — tube-like blood vessels spread all over the body. Kundalini lies dormant (sleeping), coiled like a serpent at the base of the spinal column in three and a half layers with the tip of its tongue in its mouth. The word ‘Kundal’ in Sanskrit means coil. So this feminine power is described as Kundalini — the coiled one. This entire structure comprising NÄ�dis, Chakras and Kundalini is real but so subtle that it cannot be detected by any modern medical scientific probe. 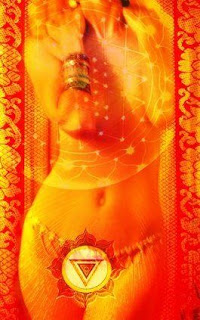